For this game you need to write out numbers 0 to 20 on a piece of paper. Make them big enough to put counters or coins on.

The first with coins on 10 different numbers wins.

For these games you need to sketch a board like this. 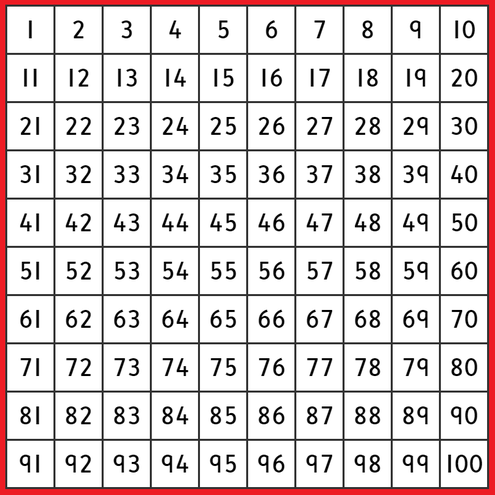 Notice how the numbers are arranged.

The first person to reach either the top or bottom of the board wins.

Up and down the scales

Can you find extra things to weigh that fit between the items on your original list?

You need two dice and a pile of dried beans.

The first to get 10 beans wins.

Paint the Squares (we have used this in class a lot)

Paint the Squares Number Charts is an interactive way to explore number patterns such as odd and even numbers, counting in multiples from times tables and ten more and ten less.

Unfortunately not the ones with chocolate chips.

Some cookies are necessary in order to make this website function correctly. These are set by default and whilst you can block or delete them by changing your browser settings, some functionality such as being able to log in to the website will not work if you do this. The necessary cookies set on this website are as follows:

Cookies that are not necessary to make the website work, but which enable additional functionality, can also be set. By default these cookies are disabled, but you can choose to enable them below: